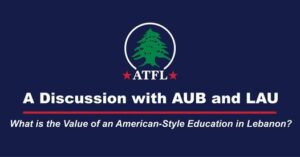 On March 30, Edward Gabriel, President/CEO of ATFL, hosted Fadlo R. Khuri, M.D., President of the American University of Beirut (AUB), and Michel E. Mawad, M.D., President of Lebanese American University (LAU) to discuss “What is the Value of an American-Style Education in Lebanon?” Their discussion covered how the multiple crises in the country have affected the universities, and the broader issue of the benefits of having US-style educational institutions in the Middle East.

Both schools have their roots in American missionary activities in Lebanon. In AUB’s case, it was founded as Syrian Protestant College which opened with its first class of 16 students on December 3, 1866. It was a time when American values were identified with the need to spread American higher education and professional skills throughout the world, and similar institutions were started in Turkey and Egypt. This link between the US and the region was in part romanticized by the proximity to the Holy Land and commercial ties soon followed. While the political and diplomatic currents of the region have been uneven at times, in any assessment, the educational, cultural, intellectual, and social links have survived and become beacons of stability and innovation for the region and internationally. In fact, Lebanese graduates who have emigrated from their home country excel across a broad range of professions including medicine, research in numerous fields, IT, entertainment, education, and public service in numerous countries including the US.

Both Presidents are medical doctors with storied careers in the US and overseas. They are well aware of the importance of keeping up ties with the US by maintaining accreditation for students who want to pursue advanced degrees abroad while sustaining a curriculum that encourage critical thinking that drives so much innovation and progress in Lebanon and abroad. When asked to summarize why the US should continue to support these universities, Dr. Mawad replied without hesitation that they are based on shared humanitarian and democratic values. He said, “Our institutions are on the frontlines in the battle for hearts and minds in the region.”

Since the economic crisis accelerated in the fall of 2019, LAU has faced the pandemic, government failure, the August 4th explosion, a faculty, student, and alumni brain drain, and the need to allocate $100M from its endowment funds to support students, and there is no relief in sight. He pointed out that an LAU education is becoming very expensive for Lebanese students who have always been drawn from the middle class. Now, everyone has suffered significant decreases in income so financial assistance is required at all levels. LAU’s medical school and hospitals depend on US equipment and it is a challenge to retain their top, and US-educated, faculty.

Dr. Khuri added that the existence and impact of the universities was for the US the best manifestation of public diplomacy because it speaks to people’s aspirations, as students, parents, citizens. He said that is it a long term investment and pays many benefits. For example, a number of the leaders in the surrounding countries have attended AUB and LAU. In fact, the lead negotiators on both sides of the Afghanistan talks attended AUB. It is not far-fetched to claim that banking, finance, agriculture, manufacturing, telecommunications, and other sectors throughout the region have relied on graduates from these schools since the early 60s.

Additional benefits include the diverse student community, encountering other cultures and values, negotiating differences, and witnessing the values of inclusiveness and inquiry. “This year, AUB is celebrating its 100th year of co-education of women and men, long before some of the prestigious ‘ivies’ in the US,” Dr. Khuri said. Support from the US government and diaspora is much appreciated as it contributes to Lebanon’s survival as the only “consensual democracy” in the region, while hosting an unprecedented refugee population.

When asked what the US should continue to do for the schools, Dr. Khuri asked for steady pressure on Lebanon’s leaders to implement financial restructuring and support the education and healthcare infrastructures. He said that “As the US continues to partner with us in public diplomacy,we will respond with our best efforts.” Dr. Mawad reiterated the need to “Continue to help us foster the democratic values that we have learned in the US, including gender equity, transparency, and anti-corruption reforms, and other good governance structures.” He concluded that US taxpayer funds spent over the years on scholarships and partnerships have spurred much progress and we need to continue to provide them.

Viewers could not help but be impressed with the commitment and steadfastness of these two university presidents who themselves embody the spirit of service, excellence, integrity, and vision – qualities that will enable the schools to survive the tremendous tumult in Lebanon.