ATFL curates the daily news to highlight stories of interest to those concerned with US-Lebanon relations and its importance to the region. You can also find us on Twitter, FaceBook, and Instragram. Subscribe below. 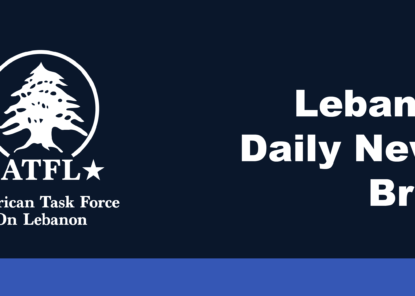 *|MC:SUBJECT|* *|MC_PREVIEW_TEXT|* January 6th, 2023 Share Tweet Forward ATFL-MEI POLICY BRIEF & WEBINAR On Thursday, January 19, ATFL and MEI will co-host a webinar where panelists will discuss the paper’s recommendations and identify areas of action for US policymakers at this crucial juncture in Lebanon’s history. Register Here The Middle East Institute (MEI) and the American […]

Disclaimer: the material contained in this news brief is disseminated for informational purposes only. As such, it does not represent endorsement, approval, or guarantee of such material, or opinions therein, by the American Task Force on Lebanon.

THIS WEEK IN LEBANON

THIS WEEK IN LEBANON provides commentary every week on important stories on events impacting Lebanon and its relationship with the US.