The 961
Here’s the Timeline of the Beirut Blast Investigation, A Year Later
Hussein Yassine

Yassine lays out an informative timeline of the Beirut Port blast domestic investigation. He writes, “The troubled journey of the investigation into the Beirut Explosion became a case in itself, turning complex with notable and interwoven events, meetings, names, and resistance from ruling politicians.”

US Representatives LaHood, Issa, and Crist write: “The people of Lebanon deserve and are crying out for a government and a country that is independent and accountable. United States foreign policy should encourage that. In supporting the people of Lebanon, we can help bring needed security to the region and also protect American interests. On the anniversary of one of the largest explosions we have witnessed in recent memory, the Lebanese people deserve steadfast support in their resilient effort towards recovery, while facing one of the most challenging humanitarian and economic crises in a generation.”

MEI experts and guest contributors reflect on the political, legal, urban, and foreign policy implications of “what may well be Lebanon’s crime of the century.” Abi-Nassif writes, “A year after the Beirut port blast, the answer to that question is crystal clear: holding criminals accountable and ending a political era that has been teetering since the Lebanese uprising began in October 2019. This of course rests on the assumption that Lebanon will actually reach the truth. The scale, magnitude, and reverberations of the Beirut blast trauma make that assumption inevitable. When so much has been lost, the risk of losing the little that remains becomes inconsequential. Both the danger and the opportunity of the moment lie in that reality.”

Kayssi writes, “What does Lebanon’s inability to arrive at a convincing common narrative about one of the most traumatic days in its history tell us about the society moving forward? The ultimate consequence of this shortcoming is that there may be no way back for the Lebanese state, which has lost legitimacy in the eyes of its people. The current leadership may win parliamentary seats in the elections of 2022, but that will have more to do with an electoral law that it shaped in its own favor, and the absence of an organized opposition, than with its appeal. The ideological framework that once held Lebanon together has now disintegrated. Only time will tell if something can replace it. Perhaps that point will only come once Lebanon’s victims have had their own day of reckoning with the politicians behind their pain.”

ICJ’s MENA Director Said Bernarbia says: ““Lebanon’s investigation into the blast has been largely ineffective and flawed, notably due to the disgraceful interference with the work of investigative judges. It’s time to end the decades-long impunity of Lebanese officials, and ensure the prosecution of those implicated in corruption and systematic abuse of power.”

Carnegie Middle East Center
A Year After the Blast

A timeline assembled by Josiane Matar and Ghida Tayara.

Kimball writes: “By now, the world knows this: Lebanon’s tragedy at the Port of Beirut in the early evening of Aug. 4, 2020, began with a mysterious plume of smoke, followed by threatening sparks the size of fireworks, and then—seemingly out of nowhere—a catastrophic mushroom cloud accompanied by a mad and terrible roar…Yet the explosion at the capital city’s waterfront was merely the punctuation mark at the end of multiple crises: a rapidly dwindling economy, a scourge of unemployment, a generations-long culture of corruption among the political elite, and record-shattering bouts of civil unrest beginning the year prior.” 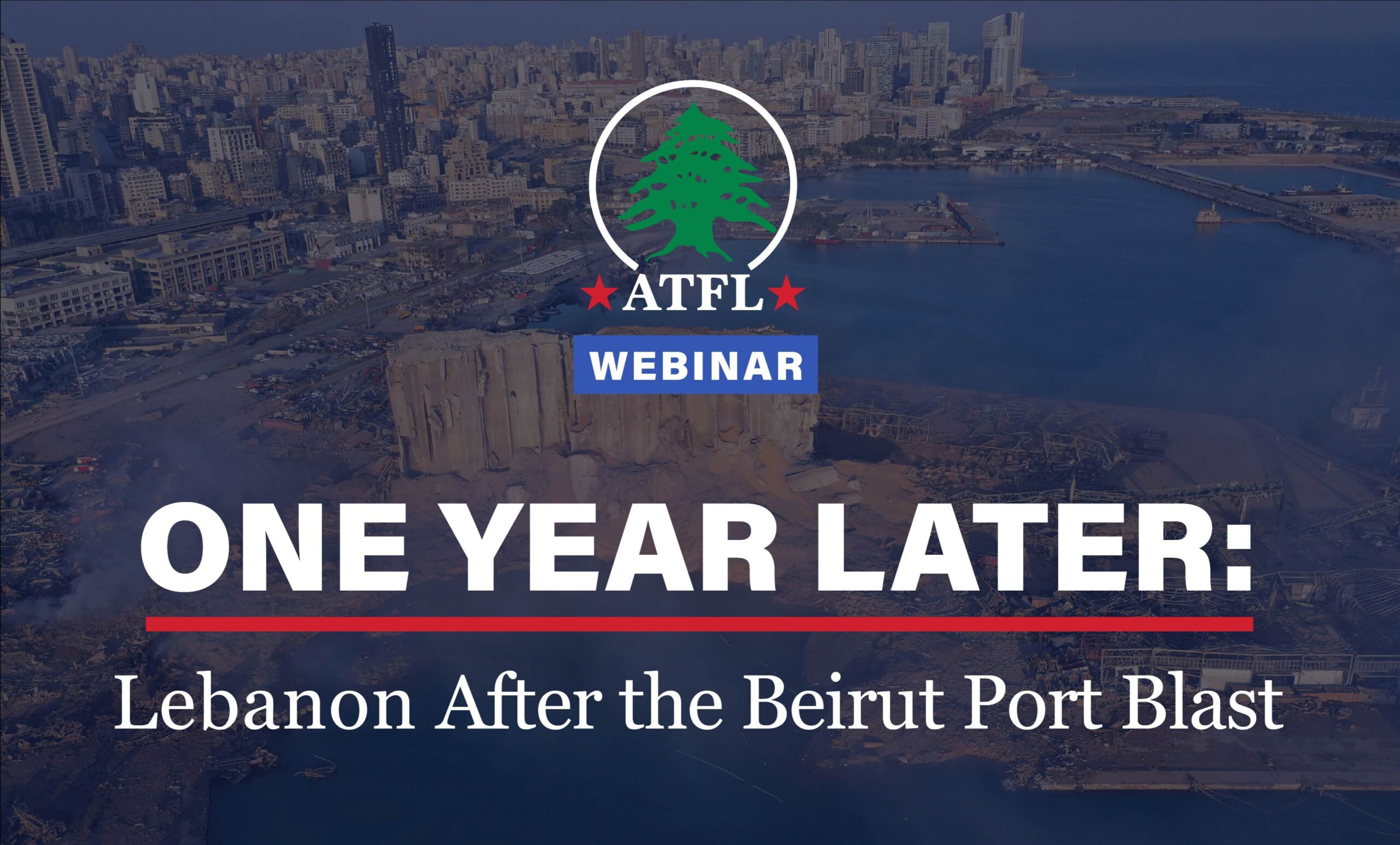 And lessons from post-conflict stabilization strategies in developing survival options for Lebanon as a sovereign state.

US Ambassador to Lebanon Dorothy Shea, UN Special Coordinator for Lebanon Joanna Wronecka, and President of the Lebanese American University Michel Mawad are among our guest speakers.