Lebanon’s woeful conditions are pushing many to leave the country. They have had enough of the impending crash of the Lebanese economy due to government mismanagement, the deterioration in the health, education, and services sectors, the collapse of the banking sector, and the vastly diminished value of the Lebanese currency which are forcing many Lebanese to emigrate as an interim solution. There are currently about 30,000 Lebanese in the US on non-resident visas, as tourists, students, and work interns. It is proposed that assigning them Temporary Protected Status (TPS) would give them the opportunity to stay in the US for a specified period of time if conditions in Lebanon are deemed unsafe for their return.

Previously, this has been done for Syrians and others whose homes are in conflict zones, subject to lawlessness and terrorism, and with no effective governmental authority. There are a number of groups rallying community organizations and policy makers on this issue, sending letters to the Biden Administration in support of designating Lebanese in the US with TPS status. Another option being pursued is a Delayed Enforced Departure (DED) status, which is a benefit authorized at the discretion of the President that allows certain individuals to live and work in the United States for a designated period of time.

TPS and DED have been essential programs for protecting those residing in the US from returning to an unsafe environment with threatening political and security conditions. It allows those whose visas are expiring to remain in the US with permission to work for the duration of the designation, which can be extended. This protects them from the threat of deportation. The President of the United States has the discretion to designate countries or regions for DED as part of the president’s power to conduct foreign relations. The president generally grants DED, which has no statutory basis, by issuing a presidential directive through an executive order or presidential memorandum.

There are some who say that Lebanon may be economically and politically distressed but is far from anarchy and desperation and specific life-threatening threats to certain groups or individuals. Many would disagree with that assessment, particularly the Lebanese themselves and those who have visited the country this summer. Nothing can be assumed to be functioning, from the lack of electricity and fuel, to the shortage of potable water and essential products, to the out of control currency, and the constant intimidating presence of Hezbollah virtually and physically in most areas of the country.

With Afghanistan in mind, some Lebanese commentators are trying to make the analogy that Lebanon can also be overrun and threatened with militia rule, but that assumes the LAF will collapse and the US will stand down, assessments which I believe are far off the mark.

Here is a chart comparing the TPS and DED designations. 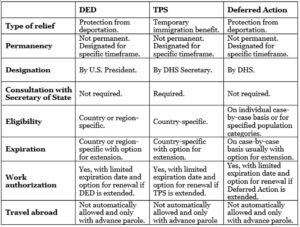 There is no doubt that Lebanon is in crisis, its people under threat, and its economy and government not soon to be reformed and functional. Lebanon’s woes are well known, and living there has become “hell” according to some, and many would agree. It’s not just the physical strain, but the psychological trauma of living in a country that has literally dissolved in terms of its operations, with a political structure unwilling to intervene, hoping that delays will further entrench their abilities to despoil what is left of the state.

As the World Bank has indicted, Lebanon is experiencing one of the top three worst economic disasters worldwide since the mid-19th century. UNICEF has raised the alarm about the rapid decline in access to safe water, and UNESCO has chronicled the demise of the educational sector. The indicators are clear, but international efforts to pressure the government to reform continue with no impact. Obtaining TPS and DED are tactics to protect those abroad who can, at an appropriate time, return to Lebanon and aid in its healing and reconstruction.

Given the asylum demands for Afghans, Venezuelans, Haitians, and many others from China, Hong Kong, Russia, Iraq, Latin America, and Eastern Europe, it is important to mobilize in support TPS and DED for Lebanese in the US if attention is to be paid to this issue. No one can deny that since the first Lebanese immigrants arrived in the US in the late 1800s, the community has made a constructive and worthy contribution to this country. Despite the hardline anti-immigration position held by many in the US, this is still a cause worth supporting.