Press Release: Arriving in Beirut, a Humanitarian Flight from the American People to the Lebanese People

This release has been updated to reflect the arrival of the first airlift and to provide an updated link to the Lebanon Relief website.

A coalition of Lebanese Americans coordinated by the American Task Force on Lebanon has organized an airlift of badly needed medicines, supplies, and equipment from the American people to the Lebanese people in the aftermath of the explosions at the Beirut port. The first plane arrived today, Monday, August 24. 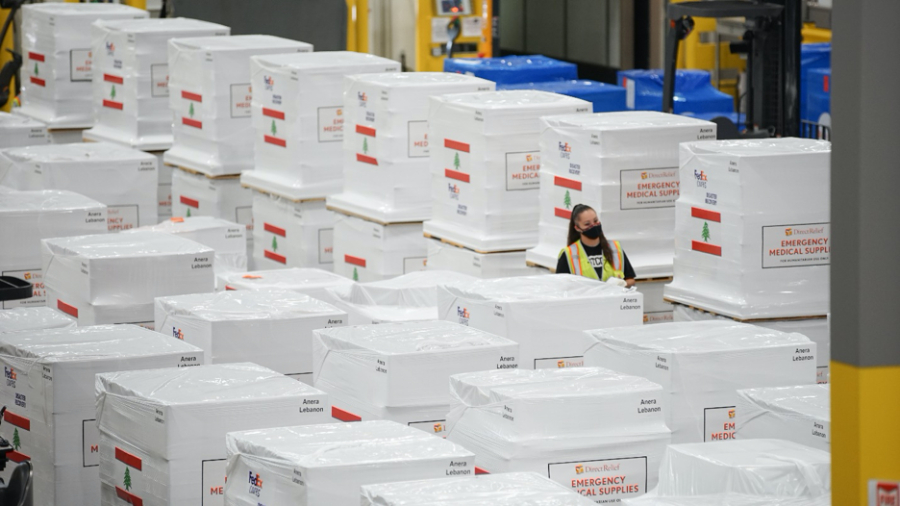 Nearly 100 tons of essential medicines and supplies has arrived today in Beirut. The shipment is a people-to-people exchange, a gift from the American people to the Lebanese. It is destined for the hospitals, critical care centers, and care providers attending to the communities in Beirut who were most affected by the shocking explosions of August 4. The shipment contains requested essential medicines and personal protective equipment worth in excess of $13 million which will help relieve the strain on Beirut’s health care facilities. This shipment includes 131 pallets of high-value medicines donated by Direct Relief as well as 96 pallets from other sources. It will arrive on a plane donated by FedEx.

This relief effort has been coordinated by the American Task Force on Lebanon (ATFL) in response to a request from the US State Department.  A team of key nonprofits specializing in disaster relief and humanitarian assistance are mobilized in a campaign to collect these badly needed items and shepherd them to Lebanon. The organizations involved in the coordinated effort include Direct Relief, Anera, the Ghassan and Manal Saab Foundation, the Afya Foundation, and the Center for Arab American Philanthropy (CAAP). Today’s is the first of several shipments by air and by sea to support Beirut’s hospitals with critical supplies.

Anera, which has a strong ground operation in Lebanon, is working with US Embassy Beirut to offload the shipments, clear customs, and distribute the earmarked materials. Rafik Hariri University Hospital’s warehouse will serve as a distribution center securing our “people to people” exchange from the Americans to the Lebanese. Direct Relief, based in Santa Barbara, CA, and the Afya Foundation in Yonkers, NY, are the logistics providers that prepared, packaged, and documented the shipments.

Our campaign will continue as we work with our members and the Lebanese American community in a massive mobilization of supplies and donations. Principal among those volunteering to coordinate this effort is Manal Saab, a long-time board member of St. Jude Children’s Research Hospital who remarked, “The outpouring of aid and help originating from our fellow Lebanese American citizens has been nothing short of spectacular. There are many hearts suffering for Lebanon and we are all in this together. We will continue this effort as long as there is a need in Lebanon.”

The response to ATFL’s campaign has been tremendous, with pallets of medical supplies and medicines ready to fill the additional shipments. ATFL President Edward Gabriel said, “This effort represents the love that we Lebanese Americans and those who care about Lebanon have for that special country. Ms. Manal Saab has been instrumental in facilitating this campaign and we are grateful for her partnership. We also want to thank the Clinton Foundation and Rep. Donna Shalala for their key support early in the campaign.”

Today’s shipment will be distributed to the following four hospitals, which are heavily involved in the response to the explosions. These hospitals will be sharing with other facilities and care centers in need:

For more information please contact the below coordinators for Lebanon Relief Project or visit www.lebanonreliefproject.com

For more on ATFL’s response to the crisis in Beirut, please visit us at: