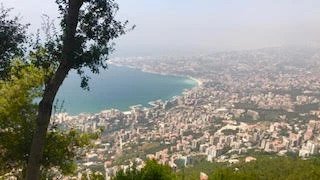 It has long been said somewhat cynically that Lebanon’s raison d’etre is to serve as the proxy battlefield for everything in contention in the region and beyond. Certainly, contemporary events bear that out as PM Saad Hariri struggles to build consensus around a new government and ministerial statement while regional players continue to shuffle the policy cards to determine what’s next on their agendas.

Distinctions between the players’ existential concerns and their dominate current interests are muddled at best. The Assad regime draws closer to its immediate goal of restoring its punishing control over Syria; Iran seeks to strengthen its regional role despite rising domestic opposition; Turkey is…well Turkey; Russia and Israel look to their interests with fervor; and the Syrian refugees await their fate.

Here’s a quick summary of several current events that are adding to the continued uncertainty despite the latest battlefield outcomes in Syria, a small détente between Israel and Syrian government forces near its borders, Syrian refugees moving in larger numbers back home, and Hezbollah’s quest for meaning after Syria.

Lebanon-Syria relations, always contentious, seem to be the chicken bone in the throat of PR Hariri. Despite prodding from Speaker Nabih Berri, pro-Syrian members of Parliament, Gebran Bassil, the acting Foreign Minister and son-in-law of President Michel Aoun, and others, the PM is standing his ground that the ministerial statement, which outlines the new government’s priorities, will not address restarting formal relations with Syria. Can he hold out? There’s no immediate consensus as there are other MPs supporting the PM. Proponents of the move argue that the step is needed to facilitate the return of Syrian refugees, re-open border crossings to allow goods to transit to export markets to Lebanon’s neighbors, and potentially give Lebanon a piece of the Syrian reconstruction pie.

Syria meanwhile seems to be holding refugee repatriation hostage to resuming relations. Over the past two weeks, a number of statements have come from Syrian sources, as well as its friends in Lebanon, that formal relations are the key to accelerating recent repatriation actions. It is worth noting that despite allegations that the Assad regime has a list of a million or so unwanted returnees, it also craves to be recognized as a legitimate government that can manage the resettlement process.

The reality though may be much different, and Russia has already indicating that it will play a key role as well so that it can task the international community with the cost of reconstruction in exchange for pressuring Syria to work with Jordan, Lebanon, and Turkey on refugee issues. So, as reported by Refugees Deeply, “Russia and Syria are seeking bilateral agreements to begin mass returns. This could be disastrous given that the Syrian government and its allies lack the capacity and perhaps the will to enable refugees to return safely and reintegrate into the country.”

The UNHCR is directly bound up in this quagmire as it serves as the mediating body for the international community on refugee affairs. It has outlined its criteria for conditions required to move ahead with large-scale voluntary repatriations in cooperation with the Syrian government. To date, however, the regime has imposed restrictions on UNHCR activities in Syria, which could leave returnees without adequate aid and exposed to more danger.

While some analysts believe that Russia and the US are winding down their roles in Syria, Israel is exerting greater efforts to ensure that Iran and its proxy Hezbollah do not become an even greater security threat. Israel is concerned with Iran’s role in the region, especially the increasing stocks of various grades and types of Iranian-supplied missiles in Lebanon and Syria; thus its insistence on Iran’s withdrawal from all of Syria. As Stratfor notes, “On the diplomatic front, Israel has focused its approach on the United States and Russia, striving to convince the two superpowers to heed its interests in Syria by containing and limiting Iran’s influence and presence in the country.”

What’s in the cards for Hezbollah’s hands in Syria and Lebanon is a subject of much speculation. Will it return to its traditional role as a political-military state within a state in Lebanon? Will it maintain a presence in Syria to enable Iran to continue to have a pressure point on Israel? Will it maintain an aggressive posture towards Israel so that Israel leans on Russia and the US to exercise what little leverage they have over the Iran-Hezbollah axis to keep tensions from boiling over?

If it remains in Syria, deployed in areas under its control, it is hard to imagine that, despite its alliance with Assad, the Syrian regime will allow it to exercise the same freedom it has in Lebanon. According to an article in Al-Monitor, “There is no withdrawal for now, only redeployments of troops in the various areas,” said one source. “If the situation stabilizes definitely, Hezbollah would pull out from certain regions, but there are areas it considers strategic that it will never leave.”

Nicholas Blanford, longtime journalist based in Beirut, describes the link between Hezbollah’s presence in Syria and Iran’s regional game plan. “Iran will play the long game in southwest Syria by relying either on Hezbollah or Iraqi militant groups. Tehran will also want to extend what Hezbollah has on its Lebanese frontier with Israel, to the Golan, and leverage southwest Syria in its confrontation with Israel in the long run. Iran is trying to shape its strategic interests in Syria as time passes by, to maintain its land bridge there against Israel.”

Ironically, Russia, which, it can be argued, saved the Assad regime, seems to risk a diminishing influence on Iran and Syria as it draws down its military role in the region. Having gained basing rights in Syria, the acknowledgement of all the local players that it is the top player in the region, and with its finger on any eventual peace and reconstruction effort, it is loath to act against Iran in Syria. As Blanford noted, “Israel and the US seem hopeful that Russia will serve as a block to Iranian ambitions in Syria, but this could be wishful thinking.”

So is the other great power, the US, still searching for a regional strategy? It appears that the Trump Administration has conceded that the war in Syria is now at a stage where the US should move on to focus on a formal end to the civil war and reconstruction. Jim Jeffrey, former US Ambassador to Turkey and Iraq, a distinguished fellow at the Washington Institute for Near East Policy (WINEP), who served as the principal DAS for the Bureau of Near Eastern Affairs at the State Department, and deputy national security adviser to President George W. Bush, has been appointed as Representative for Syrian Engagement by Secretary Pompeo. His job is to run US negotiations with other regional players over Syria’s future.

He has extensive experience in the region that should serve him well. As Ambassador to Iraq, he opposed the US withdrawal from the country under the Obama Administration, arguing that without a tangible presence in country that Iran’s influence would prevail. So he has no illusions about Iran’s regional ambitions.

One of his first challenges is to ensure that the latest deal made by the Administration, to have others pay for Syria’s stabilization fund, is carried out effectively. In announcing the US cut of its commitment of $230 million in stabilization assistance, the State Department pointed out that the Gulf States and others have agreed to fund the program. Stabilization aid is intended to provide basic services that allow Syrian residents to return to their homes and some semblance of normal life after a devastating seven-year civil war.

Al-Monitor reported that the “US has elicited approximately $300 million in contributions and pledges from coalition partners to support critical stabilization and early recovery initiatives in areas liberated from [the Islamic State (IS)] in northeast Syria, including a generous contribution of $100 million by Saudi Arabia and $50 million pledged by the United Arab Emirates.” Other commitments have been made by Kuwait, France, Germany, Italy, Denmark, Norway, the European Union, Australia. and Taiwan.

At the same time, a Reuters article noted that The US has also made it clear that “There will be no global reconstruction funding for Syria until a ‘credible and irreversible’ political process led by the United Nations is underway.” The State Department emphasized that “We will continue to provide life-saving, needs-based humanitarian assistance to vulnerable Syrians, support for the White Helmets and the UN’s International Impartial and Independent Mechanism to hold the [Syrian President Bashar] Assad regime accountable for serious crimes, as well as equipment and other measures to counter the effects of chemical weapons in northwest Syria.”

The spokesperson, Heather Nauert, explained that the decision “does not represent any lessening of US commitment to its strategic goals in Syria.” Which again raises the earlier question, does the US have a viable regional strategy that represents its long-term interests in the region?